Skip to content
This article contains affiliate links. If you click on these and make a purchase, we may receive a small percentage of the sale without any additional costs to you. Read our privacy policy to find out more. 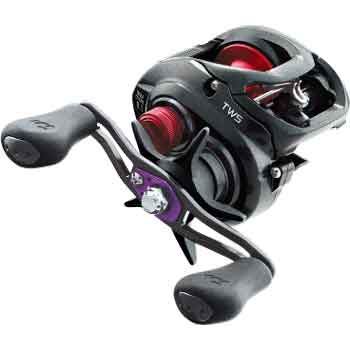 If you are interested in baitcasting and trying to find the perfect equipment to get the job done right, the Daiwa Tatula Baitcasting reel is top on many anglers’ list of baitcasting reels. Baitcasting does require different gear than your line fishing. Some may consider bait casting for tournament use or may leave it for the professional anglers. Truth is, even if you are interested in bait casting and it is your first go at it, the Daiwa Tatula Baitcasting Reel is by far considered the top of the line for the novice or pro alike.

There are several key components on this reel that is considered high performance and extremely durable. From the hybrid-design level wind feature to the exclusive Daiwa T-wing system, this bait casting reel serves its purpose. With its ultimate tournament carbon drag UTD, anglers can pull in the larger game without fear of losing their catch. How the UTD system works is that it uses larger drag disks which helps reduce start-up resistance when pulling in that large fish. The Daiwa Tatula Baitcasting Reel is a lightweight, aluminum frame reel that provides a smooth precise feel. While for the most part, this reel provides satisfactory performance. The non-corrosion resistant parts and a few slight limits on using this in freshwater or saltwater, may affect the baitcasting experience.

See The Price On Amazon!

The Daiwa Tatula Baitcasting reel is a solid purchase however there are a few drawbacks that could be experienced with your reel. Luckily, many of these are easily remedied and are not necessarily deal breakers for purchasing.

See The Price On Amazon!

The Daiwa Tatula Baitcasting reel effectively works in freshwater to lure the big catches. For this price point, the Daiwa reel is a solid purchase and with its advanced systems, this reel can last for seasons. Its rugged look with lightweight aluminum frame makes for a sleek reel that is easy to maneuver. Even with the gear side plate allowing water to possibly sip through if you take proper maintenance steps corrosion can be prevented.

The T-wing system is groundbreaking for Daiwa due to the fact that it allows for easier flow of the cast. Being able to reduce the sharp angles makes reeling in your large catch much easier. With being the only baitcasting reel with this system, Daiwa has created something that anglers can appreciate. Selecting this reel is perfect for the larger catches and with the T-wing system; you’ll definitely find a smoother retrieve. This reel has an ultimate tournament drag with a drag max of approximately 13.2 lbs. From the sleek design to lightweight feel, the Daiwa Tatula Baitcasting reel is one that will not disappoint.

I am Douglas Price, the angler behind Fishing O’clock. I love fishing, traveling, especially discovering the great outdoors.